When I decided to make a calendar of older fantasy paintings to sell on Redbubble, I wanted to spruce them up a bit with my limited Photoshop abilities. I will always use traditional methods, I think, but Photoshop is an excellent tool for enhancing work for publication.

A lot of this older artwork is mostly from the ‘90s which I don’t physically own anymore, mostly because they were done for commissions, favors—or sold to buy food. (It happens) The only records I have of some of them are photographs I took with my old 35mm camera, long before I owned a digital camera, long before they even made them! A lot of these old photos… well, they really needed help, so I thought I'd show you some of the  newer, cleaner versions.

You can see some of the untouched photos of these illustrations in my earliest posts here, such as Watercolor—You'reDoing it Wrong and Gouache and Pez Dispensers.

For instance, in the case of Baron Munchausen (above), I brightened up the colors considerably from the original. And for Autumn Harvest (below), I added a new sky and digitally redrew my signature that was partly cropped out of my old photo of it. 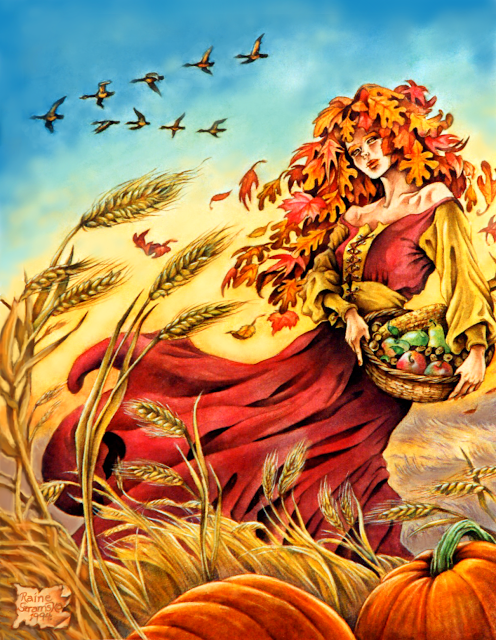 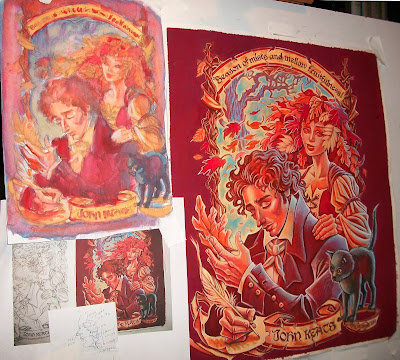 Harvest Fairy was done in 1994, in watercolor and colored pencil, when I was still trying to teach myself to paint, and the original was sold years ago. I always loved seasonal themes for my fairy pictures and the leaf-haired Autumn Fairy would return many times after this, most recently in my still unfinished painting of poet John Keats! 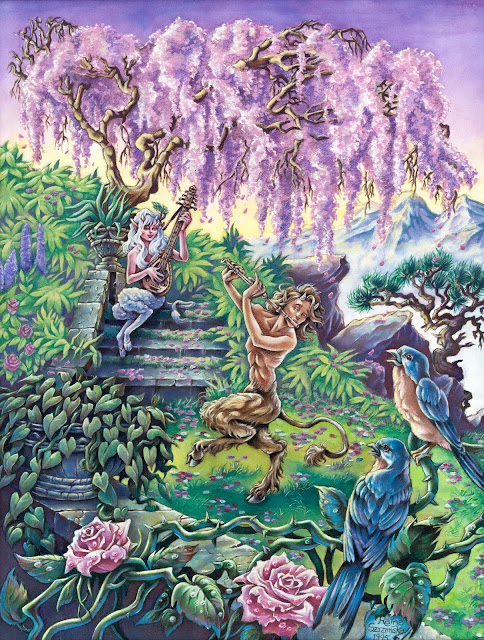 Similarly, these following old watercolor pictures from the mid '90s also went through  some enhancements.

Another of favorite theme of mine is... fauns! I love fauns and when I was a teenager I wrote a story about a faun named Ramsay, who leaves the safety of his enchanted valley in search of adventure and people who might respect him better, based loosely on the old Genesis song "A Trick of the Tail."


The old notebook that contains this story still exists and one of my dream projects is re-writing and illustrating it. So this is why you'll see so many pictures of fauns from me: practice for Ramsay when he makes his re-appearance. 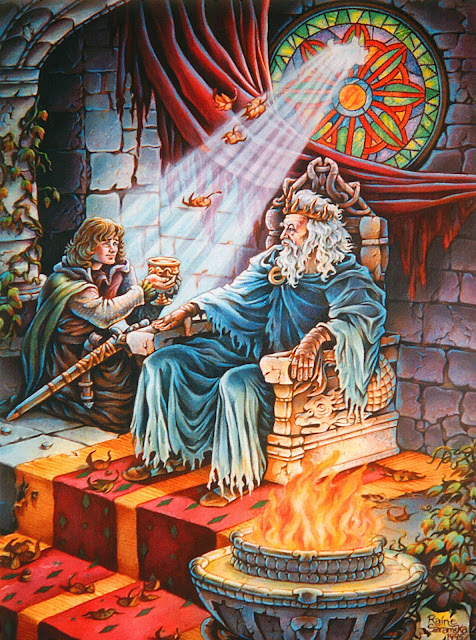 This particular painting was also done in watercolor and colored pencils (1995) and is based on the Arthurian story of the Fisher King. The simplest knight finds the most precious object on a quest without trying to look for it because he only wanted to give an old man a drink of water. Like the Spring Fauns picture above, I brightened the colors up and "despeckled" the original photo. (I love the Photoshop "despeckler.")

This original of this painting currently hangs in my mother's house. 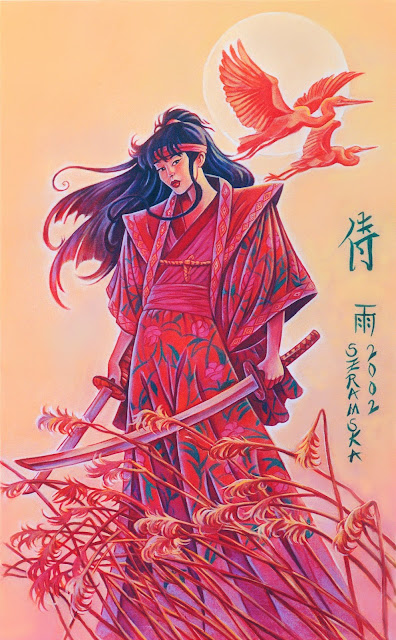 The graphic shapes tool in Photoshop is very useful to help make an object rounder, even when you've used a circle template for drawing. I used the circle graphic many times to fix my planets, moons  and suns. (See my fan art.) Case at point: the sun in the background of my Samurai picture here looks so much better now.


By 2002, when this was done, I'd already been working primarily in gouache for several years, still mixing it with chalk and colored pencils for effects. For this new enhanced version of Samurai, I smoothed out the sky and saturated the colors. This is another picture that I only have a very small photo of and I was grateful I could restore it.

Kitsune is another Japanese-themed picture which I did on a rough-surfaced illustration board. I 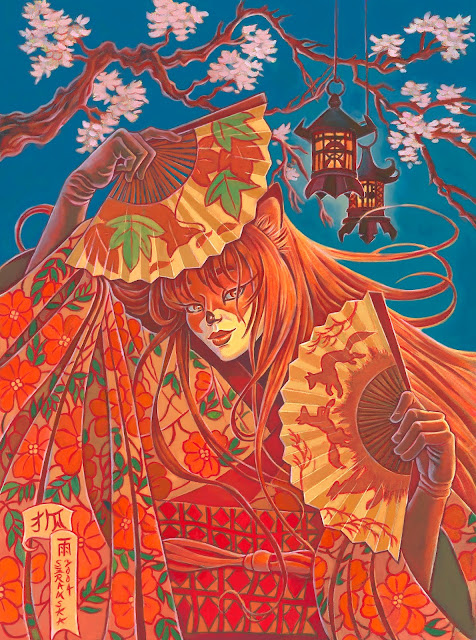 wasn't really satisfied with the grainy way the colored pencil looked on it and this is another picture where I smoothed out a lot of the rough bits in Photoshop with the brush tool.

I always feel guilty about doing something like this because I don't want to lose the integrity of the original art. (In other words, I feel like I'm cheating!) But I can't argue with the ability to hopefully make the picture look better.


Foxes are another of my favorite subjects, as well as my favorite animals. A kitsune is a shapeshifting Japanese fox fairy and I collect books on kitsune mythology, as well as their Chinese equivalent, huli jing. 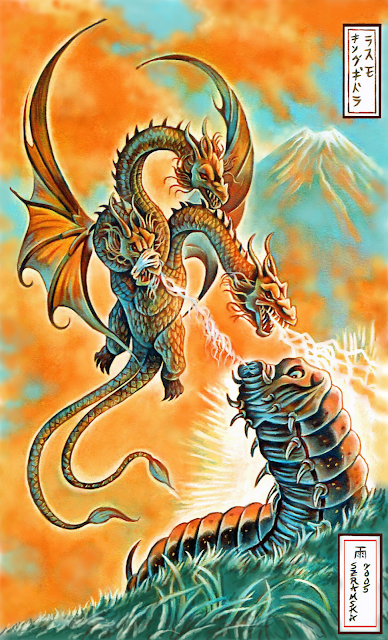 While we're currently in Japan, here's some fan art I did of Mothra vs. King Ghidorah, from the Godzilla movies. (I've always been huge Godzilla fan and yes, I even have toys.)
A friend has the original painting and I have (as usual) a tiny photo that was actually cropped in a weird way making it necessary to try and fix it. This is another painting that had some parts redrawn with a mouse! (I really, really need to get a tablet and stylus one day...)
I also re-worked the sky while I was at it and used the graphics tool to make the boxes of kanji-text a little neater-looking. I also saturated the colors of the original photo big time. 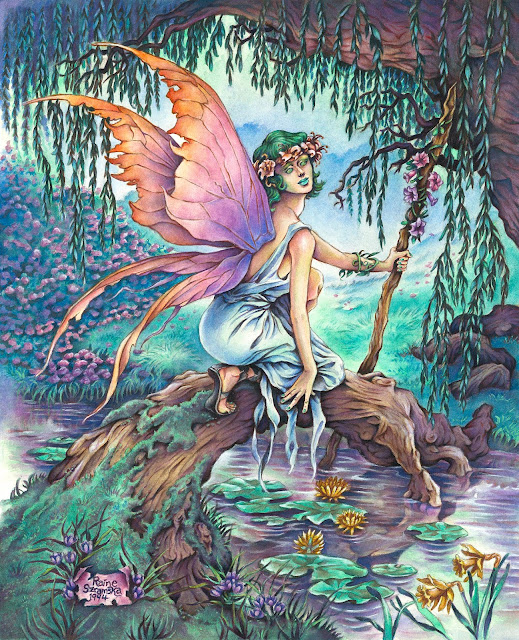 Here's some other older seasonal fairy paintings from the mid-'90s that were also done before I made gouache my favorite medium, so the colors in these paintings are a bit more pastel. 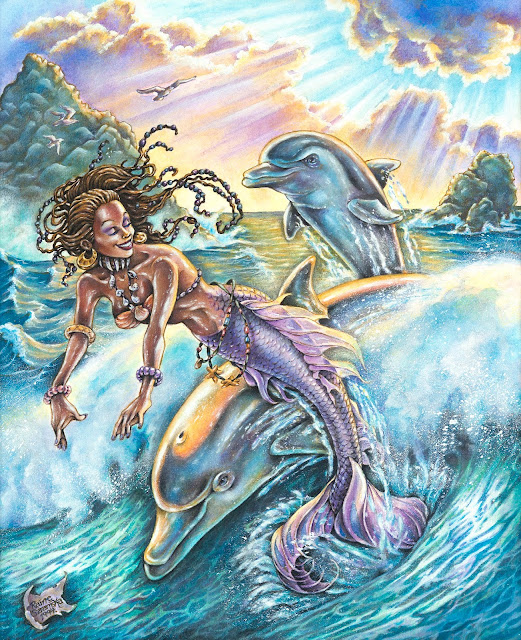 I tried to saturate and smooth out the tones again here. Bear with me—I'm still a Photoshop novice and I'm still learning how to use it more effectively—but hopefully not too much!

I'll leave that for the superb digital artists who are much better with this medium. 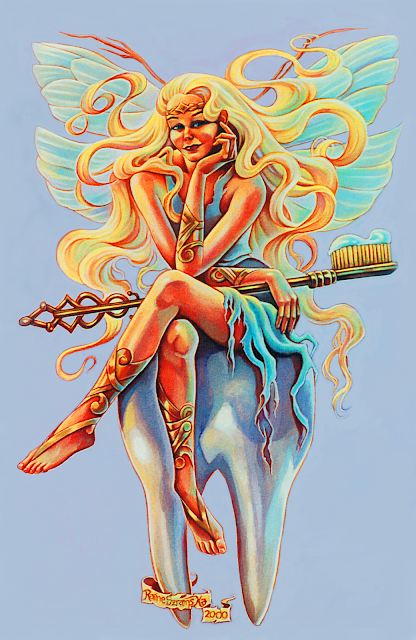 I'll leave you with the Tooth Fairy as my last "rescued" picture featured here in this post. (The usual, gouache, 2000.) I have many more old paintings that I'm still working on rescuing, and some that I'm convinced would be much better if I started new versions of them.

In my next post, you'll see some more of the ones that I've restored a bit, along with some old "making-of" sketches from the '90s and early 2000s that I forgot that I had. I thought they might be fun for you to see.

And I will get that Keats painting done eventually!