All This and Heaven and the Dead City...

With a fixed determination
Entered I each habitation,
But they were all tenantless;
All was utter loneliness,
All was deathless desolation.
-- Christina Rossetti,
"The Dead City"


Paint an ongoing webcomic comic by hand? Are you out of your freakin' MIND??

Yes, this is something I ask myself on a daily basis.

But still, here we have "Heaven and the Dead City" and it's something that's been about 25 years in the making.

In 2010, an old friend named Bill Cucinotta contacted me and asked if I wanted to contribute a comic story to his and Gerry Giovinco's new and awesome online CO2 Comics.  ( http://www.co2comics.com/)  First off, I don't know how Bill found me since to all my former comic book cohorts from the early '90's, I may have well dropped off the face of the earth. But find me Bill did and he kindly asked if I had anything I might want to contribute. 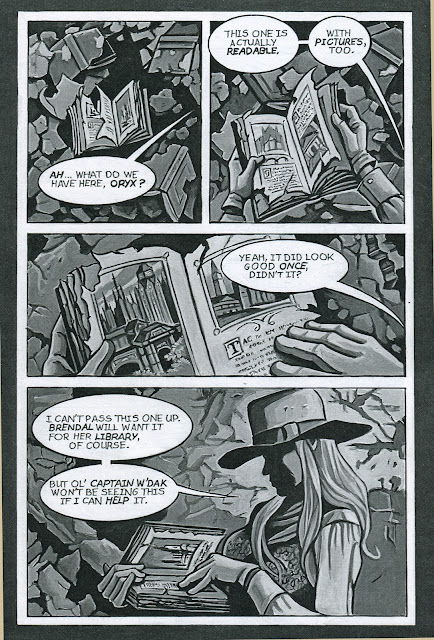 "Well, there is this story I've been working on for awhile..."

Even though Bill hadn't seen a single panel from this "story", he trusted me with producing serialized pages of it on a fairly regular basis. ("Fairly regular" I say because I've sometimes missed my own self-imposed deadlines for when the new pages should go up...)

And now the story is three chapters in and each new page I paint I'm learning as I go. I'm discovering what can be done with the gouache I use to paint it, how using darker outlines in certain cases are graphically better for emphasis, etc, etc. Nuts and bolts stuff. This has been "Heaven and the Dead City" for me and it is by far equally the most exciting and most demanding project I've ever attempted. 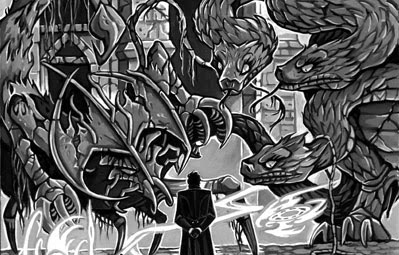 It didn't start off that way. Let's take the time machine back to 1982, Moore College of Art in Philadelphia when I was a student there. (Two years later I would transfer to Pratt Institute in New York.) We all had to keep sketchbooks and I remember how incredibly dull it was to practice drawing the everyday stuff around me. Even though it is  excellent practice to draw "mundane" stuff like still life arrangements, the view outside your dorm window, the car parked on the street, I would have none of that. I wanted to draw what interested me most. So...
I started to fill the sketchbooks with monsters, knights with swords, winged lions, fauns, faeries, angels, mermaids and castles...etc. And some dark mysterious guy in a frock coat. 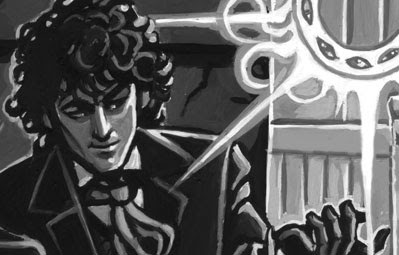 You get the picture.
Unfortunately, to my horror, we all had "Sketchbook Review" with the professors: they would take a look at what we'd all been drawing in our free time. When I showed one of my teachers, an elderly Russian man, these pages of epic geek-girl fantasy, I was surprised that he was actually delighted by it. "You're quite a romantic, aren't you?" he asked my embarrassed 20-year-old self.
So I learned two things in my freshman year of art school:
1) I was still a Colossal Geek (albeit, a romantic one); and
2) Always keep really embarrassing stuff in a separate sketchbook.

Which brings me to how what would someday be called "Heaven and the Dead City" came about. I started a "graphic novel" in said separate sketchbook, purely for my own entertainment. I had always been a habitual story writer as a teenager (kept drawers of "epics" I never showed another living soul. Yes, I still have them, as cringeworthy as they may be.),  but this was something new, based on the resurgence of my interest in comics in my twenties. I started hanging around comic shops in Philly and it rubbed off in my sketchbook. I brought this "story-sketchbook" to my classes with me and my first readers (besides my sister, Victoria, Swamp's biggest fan) were other students in the class who asked me daily if I had drawn new pages to read.

Without even thinking about why I was doing it, I started a story about a ruined city, a girl on horseback ... and a dark mysterious guy in a frock coat. (Well, what else? My favorite book was "Jane Eyre", after all.)

The mysterious stranger needed a name. There was a creepy Talking Heads song on the radio a lot that year called "Swamp"  (the one with the growling refrain, "Hi, hi, hi, hi, hi, hi.") and it stuck to the mysterious stranger like glue. The girl on horseback was sort of a reverse Jane Eyre when meeting Mr. Rochester (she meets him while riding a horse, not the other way around), and her name would become Yaira. Along with the haunted Dead City that Yaira scavenges,  there was also another city far away, all bright and shiny... and corrupt. And full of even more characters with "special" abilities. And I went back and forth in my sketchbook between the characters in the two different cities until they finally converged and met each other. Plus there was magick, ghosts, monsters...and these weird whirligig things with eyeballs.

However, I told myself I wouldn't take drawing this story seriously until I learned how to draw perspective somewhat properly. There would be pages and pages of cityscapes that needed to look halfway convincing and when I started art school I didn't know the difference between one-point, two-point and three-point perspective. And how exactly did you find the horizon line, when you couldn't see the horizon? Pespective to me had once seemed scary and mechanical. Now --
Perspective is my friend and we hang out and have coffee together. 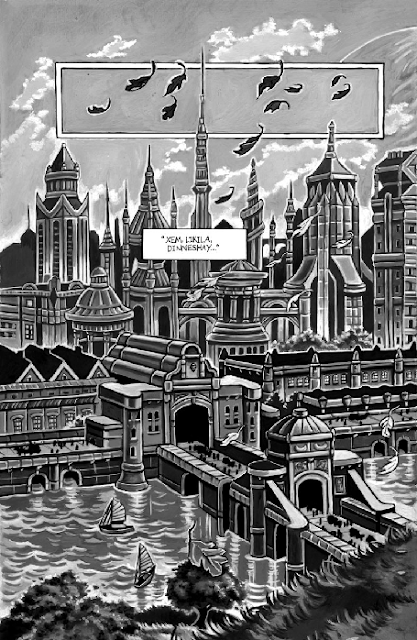 (The horizon line is always at the eye level of the viewer. These and other things about the wonderful world of perspective-drawing  I actually taught myself from books, the same way I taught myself how to paint... more-or-less... Though I'm no master of perspective now, I'm light years better than I was in college, to be sure.)

This was all pretty ambitious to be contained in just a sketchbook but I never actually thought about pulling it out of those pages for another two decades, though the story kept getting older with me and (hopefully) maturing. I began to seiously rework it right past the new milennium, convinced I was going to put it on "good paper" and make a proper comic book out of it. However, after September 11, the prospect of drawing a destroyed city was not very appealing to me and the project got shelved again. But I was far from giving up on it and it took a different turn as I wrote it a new beginning.

By the time Bill contacted me, I had three chapters started and about 70 pages of penciled art that I wasn't quite sure how to progress with. I didn't know a thing about digital art and I wasn't a particularly good inker (or so I told myself then)... should I try to paint the thing? With my old friend, gouache? How much work would that entail?

Well, a lot, I discovered. I was also handlettering it. But for me, there has always been something therapeutic about making a picture from start to finish by hand...A type of "Look what I made, Mom!" "Oh, neat, let's hang it on the refrigerator!" mindset.  Maybe it's also some sort of Arts and Crafts mentality that my archaic-minded brain gets into. I really just like shoving paint around with a brush. But I was up for the challenge to myself. 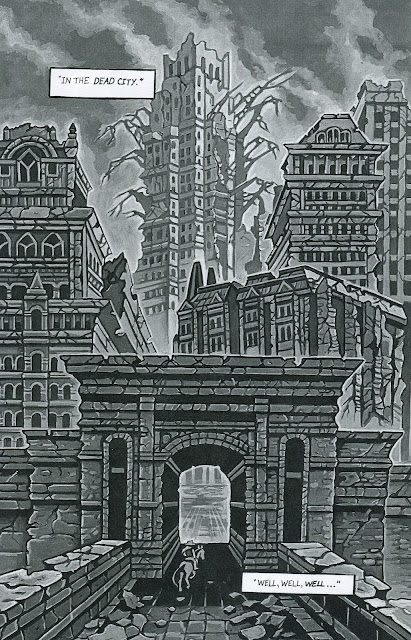 The decision to paint in black and white (or more accurately in shades of gray) came about due to my original plans to self-publish the story. It's always cheaper cost-wise to print in black and white. Also, had I added color as another element (other than in the cover) it would take me AGES to get anything done. So I tried for a gothic black and white movie effect.

As I worked and saw each subsequent page reproduced on CO2 Comics' website, I saw what I could do differently and what could use enhancement. I started to learn things about the medium I had chosen to work in and what things worked and what didn't. The more pages I produced and the  deeper I got into the project, I began to learn what I was actually capable of doing. With each new page I painted, I learned a new working method.

I had a very short and scattered comics "career" (not the word I was really looking for, but it'll do...) in the early 1990's and this is the subject of an upcoming post. I pulled away from comics as a storytelling medium out of frustration about the industry in general in those years. Things have changed a lot since then, but I had already retreated and went back to doing stories on my own, in private, only for me in my sketchbooks again-- and that's what "Heaven and the Dead City" is a product of, me trying to entertain myself. (Also much like the Pre-Raph cartoons I've started doing recently--see previous post...)

CO2 Comics gave me the scary and admittedly ambitious experiment in trying to take this long story out of my sketchbooks and into the new realm of  webcomics. So that's what we have here.  http://www.co2comics.com/pages/co2_heaven_and_the_dead_city.html  I will write future posts about the ongoing process, the story and the characters. And my own adventure in writing, drawing and painting a story I began when I was about 18 years old continues...
Posted by Raine Szramski at 10:56 AM 2 comments: