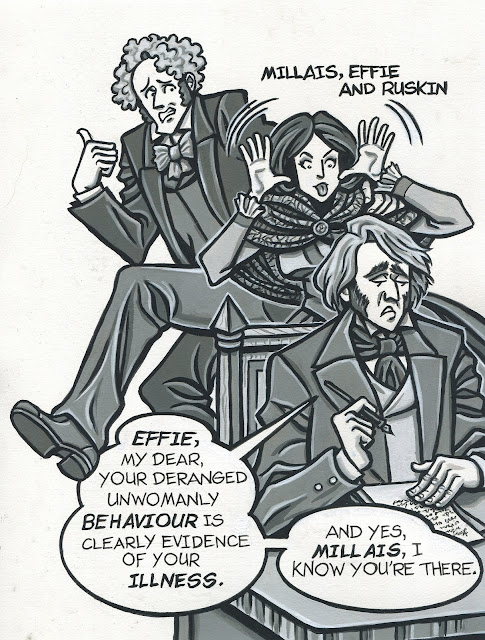 As you probably already know, I have another blog called Pre-Raphernalia which is full of many, many silly cartoons based on the lives of the Pre-Raphaelite artists and their circle. (Read about the making of it here and here.) They're all done very informally in pencil, in my sketchbooks, which I then scan into my computer and post on my blog and on Facebook. You will see in these scans the edges of the paper, the seam of the binding, eraser crumbs, etc. As I  do this mostly for fun and my (and now hopefully others' entertainment) I was unconcerned about the casual appearance of the drawings, which I think is part of their fun as well. (Well, at least for me...)

Because I've been asked to gather them together into bookform for possible publication, it was also suggested that I go and clean them up a bit (in other words ink and actually neatly letter them, using a variation of my favorite medium, acrylic gouache.)

You can see the difference between the pencil drawing and the "cleaned-up" version here: 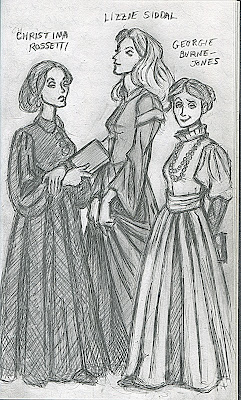 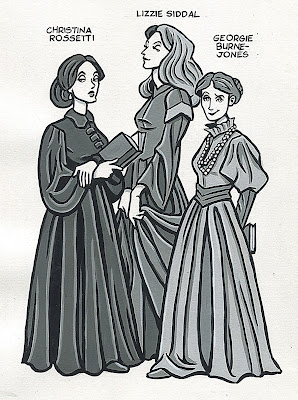 So I've been slowly but surely trying to ink and letter them when I have the time around other assignments and projects. Because they're cartoons and somewhat flat as far as outlining and shading go, they don't take as long to transfer and paint as say, my pages of  Heaven and the Dead City do. And I can get them done light years faster than any color work I do! (Color adds a new dimension and  much more preparation-- at least for me-- as I demonstrated in my last post about the Keats painting, which still isn't done yet. *sigh*)
I photocopy the cartoons from my sketchbook to a larger size, trace them onto a sheet of vellum bristol paper (on which I do almost all my painted artwork). I clean up and "fix" the drawing, then I get out my old-fangled Ames Guide to letter it. (Yes I still use an Ames Guide.)
Carla Speed McNeil, the creator of the amazing graphic novel Finder (read it!!), once gave me superb advice for lettering your own comic if you are particularly unsure of your own lettering skills. I had approached her as a newbie at a convention after attending a panel for independent comics publishers and she suggested typing the text up (in the proper size and font of your choice) on your computer, print it out, then use it as a guide on your lightbox to trace over. (This is where the Ames Guide comes in for ruling out where to place the printed type.) Using this wonderful idea (I bow to you for your advice, Carla!) I was able to appropriate even a Kelmscott font for this cartoon of William Morris and Edward Burne-Jones: 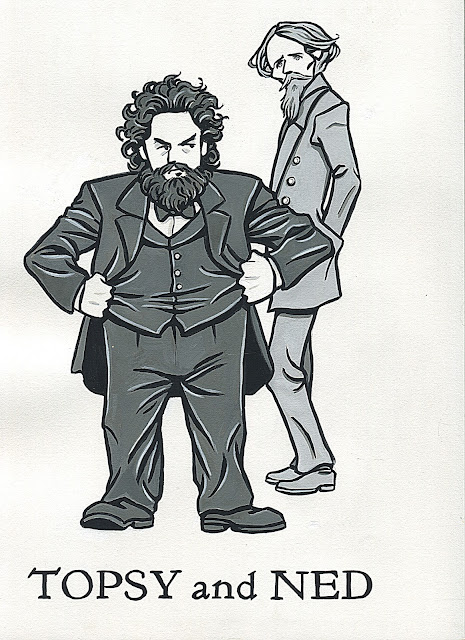 Then the drawing is lettered using my good ol' Micron Pigma pens:

I use a Micron Brush pen to begin the drawing.
Then finally I begin painting using my tubes of various shades of Acryla gray gouache. Only four shades rather than fifty. Hahaha... I crack me up. Okay, right, moving along...

I prefer using imitation Sable Rounds, as I've mentioned in a previous post on this blog. Acrylic gouache is an amazing invention: it has all the velvetty matte properties of a gouache finish, plus it's waterproof! It makes my brain explode with how useful this stuff is. Unfortunately, I can't just go down to the local art supply store and buy tubes of it because most art supply stores don't even carry it. I usually have to order it online and pay what I think is waaaay too much for shipping... (Oh, don't get me started...) But eventually it does end up in my mailbox and I am doing a happy Snoopy dance again.

Lastly, I use a brush and black paint to give what's hopefully a more organic flow to the drawing's outlines. Then I add highlights with Permanent White paint (most opaque), as well as using it to correct small errors.


So here are some of the cartoons that have been inked and painted so far using this method. Many, many more to come! 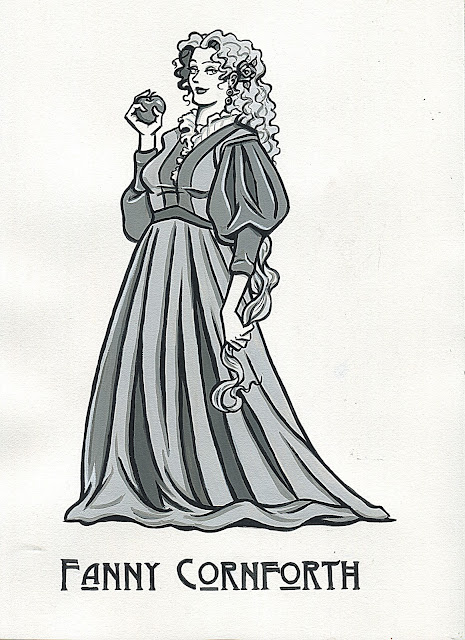 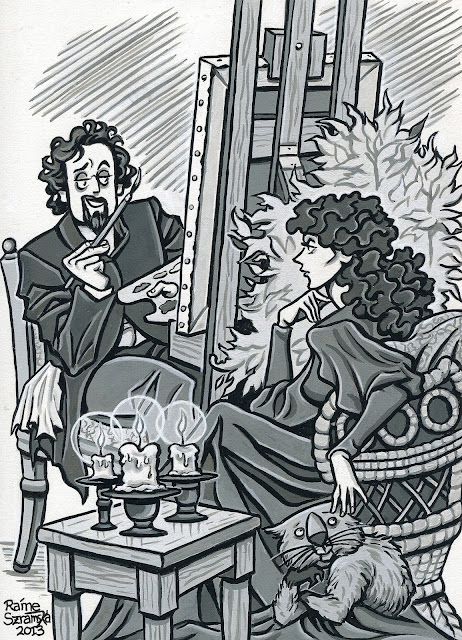 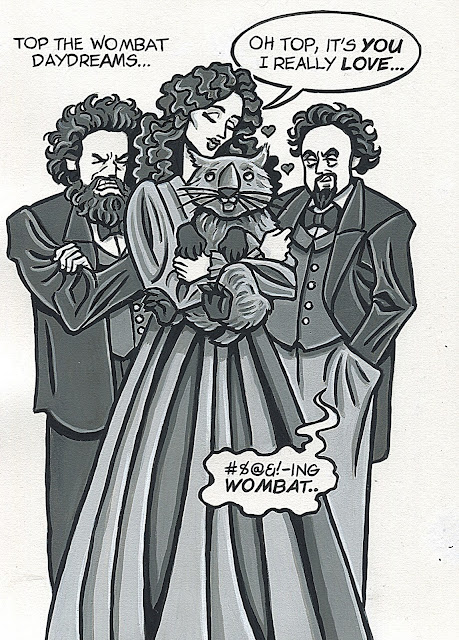 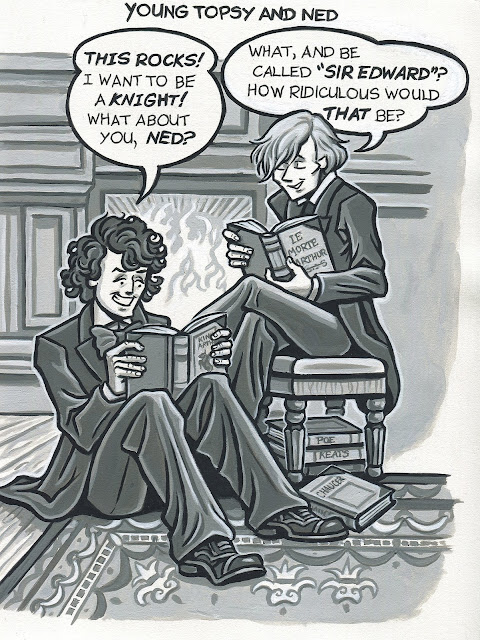 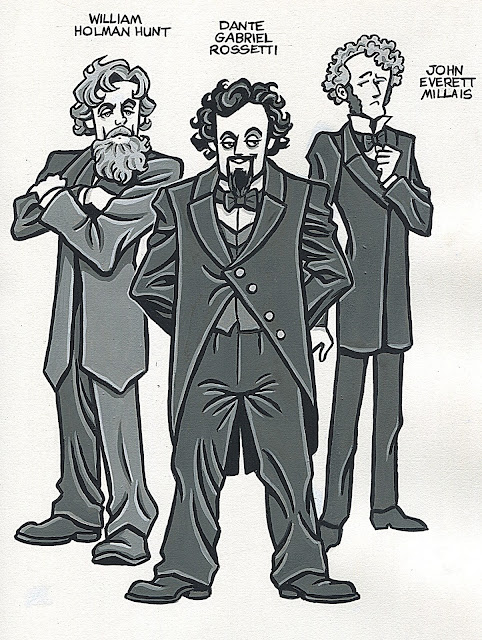 Posted by Raine Szramski at 5:19 PM No comments: