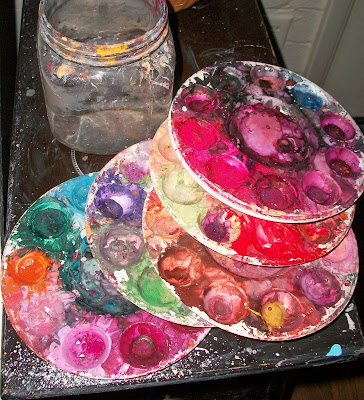 It's been awhile since I posted on The Watcher Tree since I've been busy with several projects: Heaven and the Dead City, the Pre-Raphernalia blog ( and new cartoons)-- and most recently a bookmark of Oscar Wilde for Graphic Classics. But I miss doing paintings unrelated to these projects (in my non-existent free time, since I also hold down a 40-hour a week job at a bookstore!) and often months (or years) can go by before I return to an idea for a painting.
﻿﻿﻿﻿﻿﻿
This is one of those cases. I began a painting of poet John Keats that has been frequently interrupted for projects with actual deadlines.  I thought I'd share  the steps I take to get to a finished picture. In this case, it's far from finished, but this is where I am so far...
﻿
Bear with me.
﻿
I wanted to do a new painting in gouache of a drawing in my sketchbook inspired by John Keats' poem "Ode to Autumn". My idea was to have Autumn herself as a fairy muse to the poet as he wrote.

And true to my propensity for  always getting an animal in a picture as much as possible, I added a kitten who is fascinated by Keats' feather quill pen. Though Keats was a cat lover, it's never mentioned if he had a feline of his own. Still, he was born on Halloween and I thought a black cat was appropriate. (I have a weakness for black cats as it is-- I have two.) 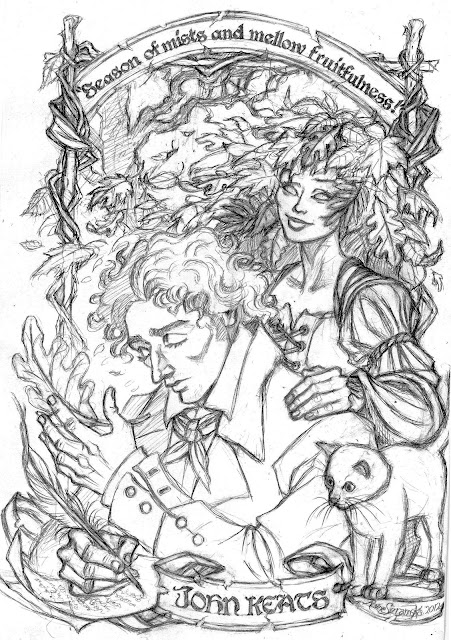 ﻿
I photocopied and enlarged the sketchbook drawing and
transferred it to tracing paper.

On the tracing paper, I adjusted the figures as needed, found some cat reference and a font I wanted to use for the lettering in the banners.

Then when I was (sort of) happy with the revised sketch on tracing paper, I transferred the drawing --using a light-box-- to a sheet of vellum bristol paper to do the final drawing and painting. (I find that vellum bristol has the best surface on which to paint -- plus it's inexpensive and comes in pads.)

I printed out the type in the font I'd chosen, then traced it onto the bristol paper as well. I also adjusted it as needed to fit the shape of the banners.

The next stage was making photocopies of the drawing to look back at as I start to paint. I also use smaller photocopies to paint on to see which colors I want to use: 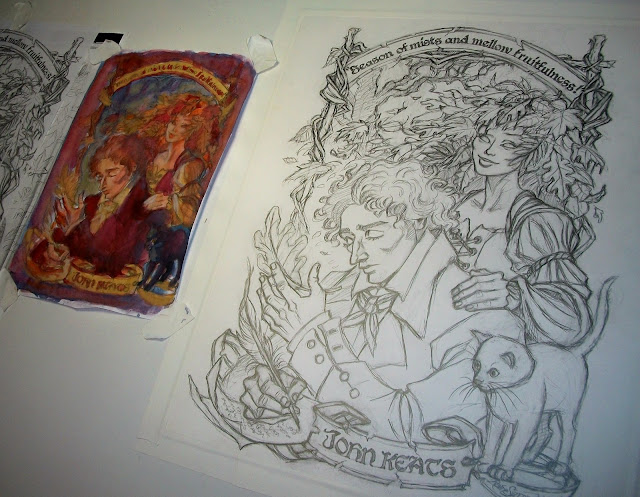 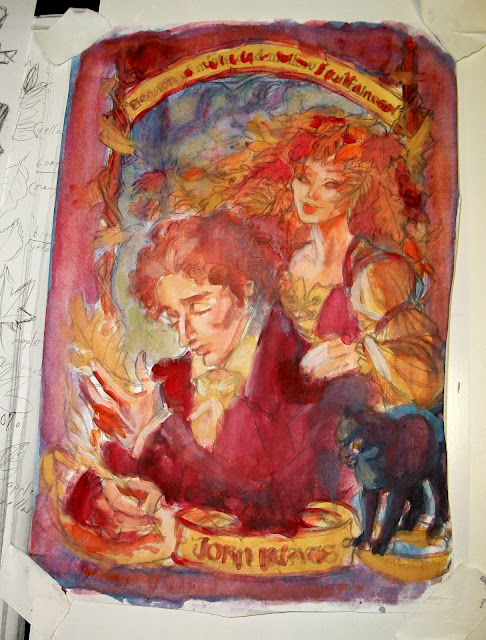 I taped the finished drawing down on my table so that when I begin to paint I can hopefully prevent the the paper from buckling.

(left) These are the colors I wanted to use (more or less).  I played around very loosely with my gouache on a photocopy.

I let myself be as sloppy as I wanted while doing this. Again, playing...

(below) The next step is "inking" the drawing. This is my way of sort of  preserving the pencil drawing underneath and I use waterproof sepia gouache. I do this incase I need to wipe paint away at a later stage. 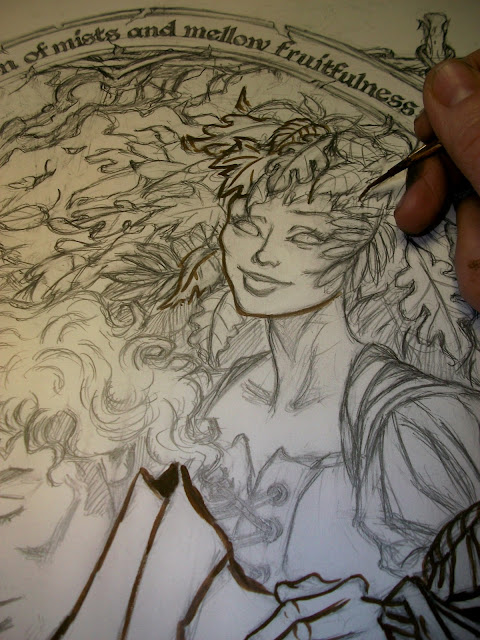 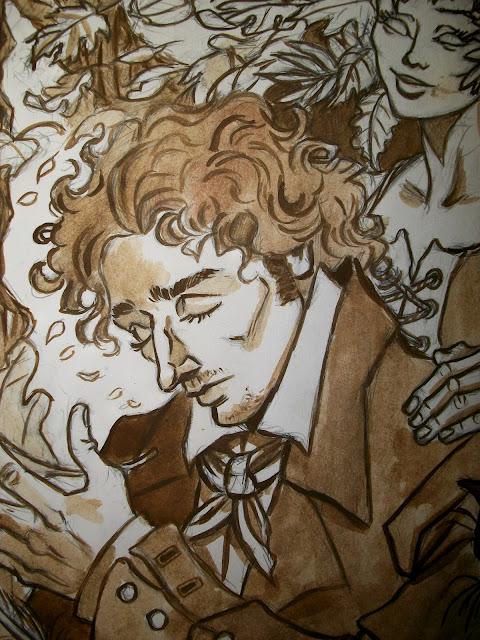 When I'm done with the sepia, then I get out the other acrylic gouache to make a sort of waterproof underpainting.

The idea for me is to keep these colors bright so I can later blend regular, non-waterproof gouache on top of it, and sometimes colored pencils,chalk or pastel as needed in places. 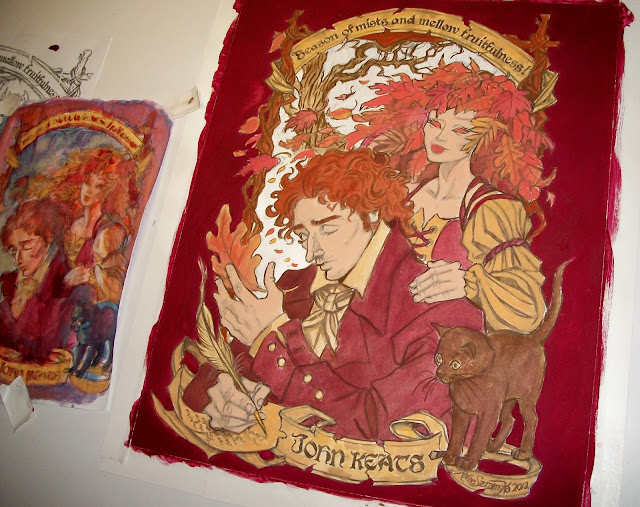 Using the color sketch as a guide, more flat tones of acrylic gouache... 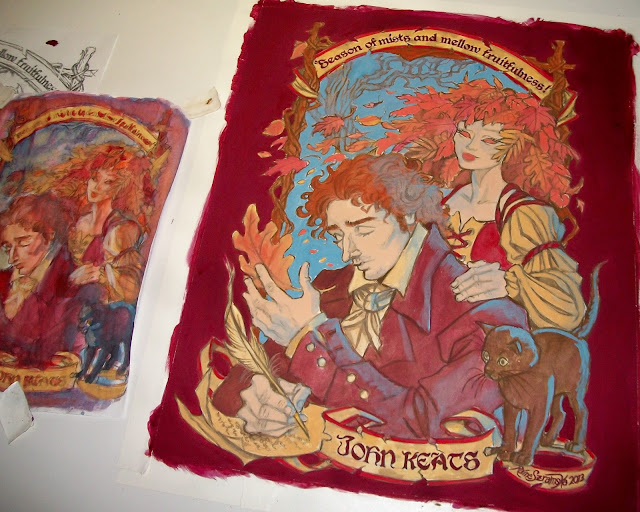 And then the most fun, longest and often most frustrating part of the painting begins when I pull out the regular gouache paints and start blending on top.

So this is where I've left off so far-- the painting is at its awkward adolescent stage. 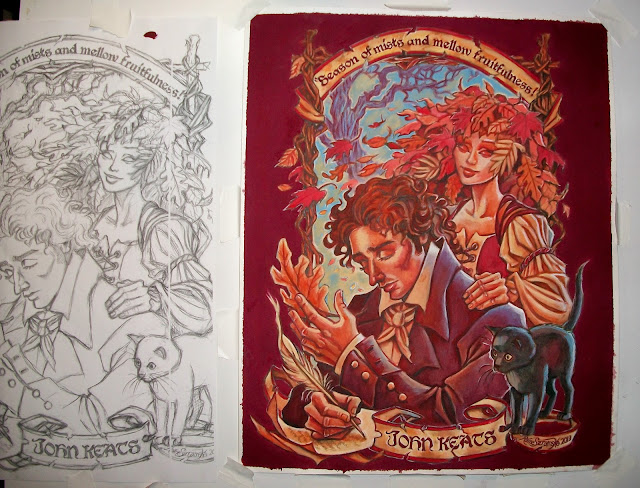 I will post Part 2 when the painting is finally looking finished....
More to come. 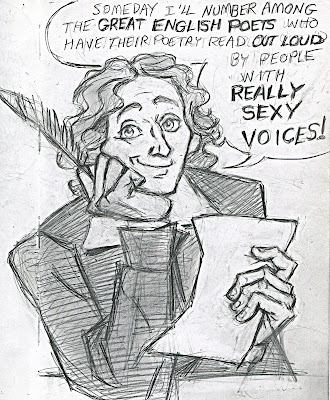