The Doctor and I

I've recently done some Doctor Who fan art... for no other reason than because fan art is FUN. The challenge with this particular fan art is trying to show a Doctor we haven't really met yet (though, as of this blogpost we've all famously seen only his eyes.) This will change, of course, in the upcoming Christmas special next week. We don't know yet what the Twelfth Doctor ("No sir, all Thirteen!") will be wearing, only that he will be played by the very wonderful Peter Capaldi. And rest assured, Mr. Capaldi will make an AMAZING Doctor.
I was extremely excited for Mr. Capaldi the moment I heard he was in the running for the new Time Lord. Not only is he a brilliant and versatile actor, but we'd finally have an older Doctor again! Maybe I'm also all excited because he's closer to my own age. You see, I'm a Doctor Who old-timer. How old? Well...let's just say that Doctor Who and I debuted the same week back in 1963. The Doctor and I are both 50. (Well, give or take a thousand years.)

When the 50th Anniversary special loomed and I did not have BBC America, I made a desperate attempt to avoid spoilers (they were popping up all over the internet) by slamming my laptop closed and pulling out my sketchbook to distract myself. I started doing a lot of very quick, silly Doctor Who cartoons that I will share here. (I apologize for the unfinished sketchiness of them but I was just goofing off while I was waiting for the Day of the Doctor to become available to download from iTunes... and meanwhile, all my UK friends were able to see it in cinemas with a live audience! I was feeling the agony of being BBC-less.)

But after I finally did see the special (about 2 a.m. in the morning, US Mountain Time) I was very pleased in my assumption that Twelve would indeed have a particularly powerful stare... 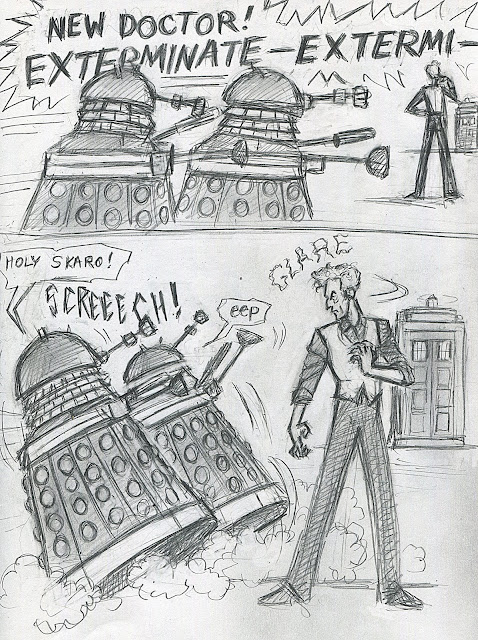 Everyone who knows me knows what a Doctor Who geek I am. Here is some evidence (taken earlier this year at the Phoenix Comic-Con):

Doctor Who premiered in November of 1963 in BBC television for the first time and starred the beloved William Hartnell as a mysterious and somewhat grumpy time-traveler. (I premiered several days earlier in a hospital in New Jersey.) I would not become aware of this peculiar British show until years later, when I was a small girl visiting my grandmother's house.

It was there on my grandparents' television set that I first became entranced by Jon Pertwee in his velvet smoking jacket and frilly shirt using Venusian aikido on some fiendish villains somewhere in England.

And here were scary plastic people coming to life and making me run behind my grandfather's easychair. For some reason, when I was a little kid, a man being done in by a melting plastic chair was the most horrifying thing I'd ever seen. (Forget Daleks and Cybermen: even to this day, I still view plastic chairs with a certain distrust.)

Despite plastic chairs and giant maggots and dangerous goo everywhere (hasn't anyone in science fiction learned by now that you should never touch the goo?! The GOO is always BAD!) I continued to watch this strangely wonderful science fiction show with increased fascination. I had no doubt that the man in the frilly shirt would save me from the monsters.

And I admit to having had a little crush on Jon Pertwee as a small girl. (Maybe it was the hair. It's always the hair with me...) 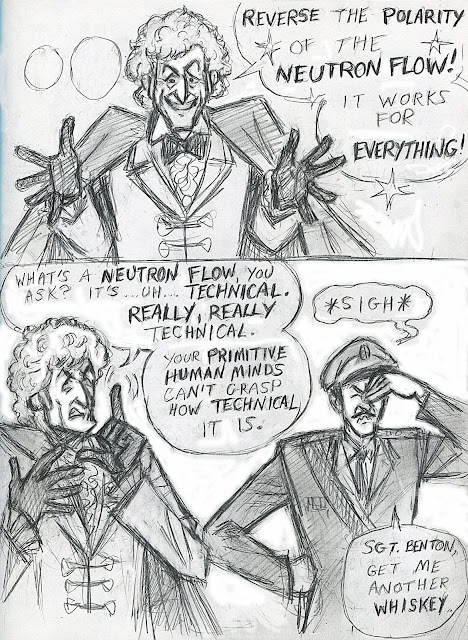 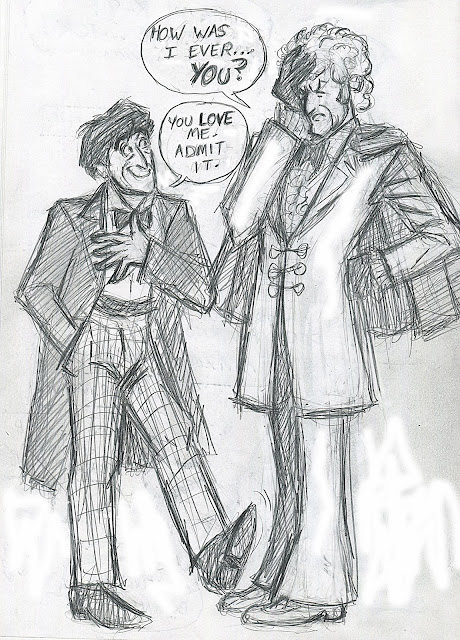 But this was just the beginning of my love for Doctor Who. It would be years later when I was re-introduced to the Tom Baker era and onward. And still later I would finally see the episodes with the man who had played the Doctor when I was born: William Hartnell. This was soon to followed by the marvelous Patrick Troughton who could seamlessly switch between clownish elf and  very intense scientist. The contrast between the Second Doctor and the tough, athletic Third (Pertwee) made for some of my favorite Doctor Who moments when they would risk a time paradox and meet each other.
﻿﻿

While I think each of the Doctors has his own individual endearing qualities, I-- like everyone else who loves the show -- have my favorites. I'm loyal to the Third Doctor, but also grew to love the Second the more new episodes of his I discovered. I admit to being one of the Eighth Doctor's early defenders and having a longtime fondness for Paul McGann's very excitable, easily distracted romantic-- who had books and candelabra in his TARDIS.  His is still my favorite TARDIS interior mostly for, well, how cozy it seemed with the rugs and the candles and the other gothic touches. It was like Lord Byron in space!
(Eight, of course, was later to become sad and disillusioned before he finally got his missing regeneration scene this year.)

I took one of those goofy online quizzes just recently. "Which Doctor are you?" Well, I must have been sufficiently grumpy when I took the test and ended up being the First Doctor. Apparently no one is ever to make the mistake in assuming I'm frail or weak. Also, I'm capable of tearing apart a planet for someone who's earned my trust. In The Five Doctors, he was the one who kept the coolest, wisest head (even if he was played by another actor) and he ended up saving the day. The other Doctors all deferred to him.
Never underestimate One: he was a badass. 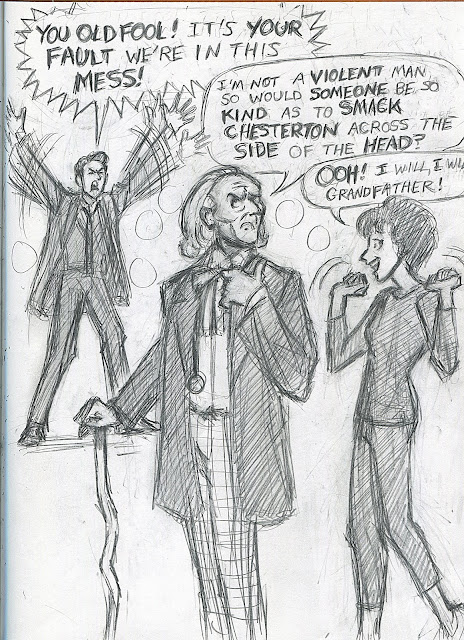 Trust me, this is not the end of the Doctor Who fan art. Between working on my other projects, I've started a portrait of William Hartnell in the same style as I did the Midnight Hour picture of Twelve. This will be followed by each of the other Doctors (yes, John Hurt, you too) until I get back around to Twelve again and we'll finally know what his costume will look like. Naturally, I'll have do a new one.

I leave you with some more silliness from my sketchbook, also done while  trying to avoid 50th spoilers... 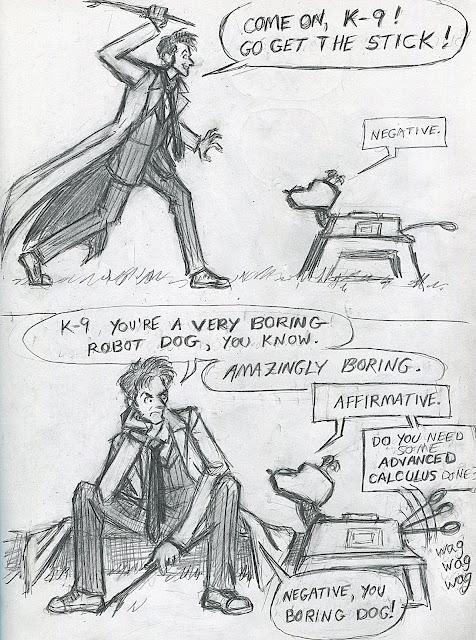 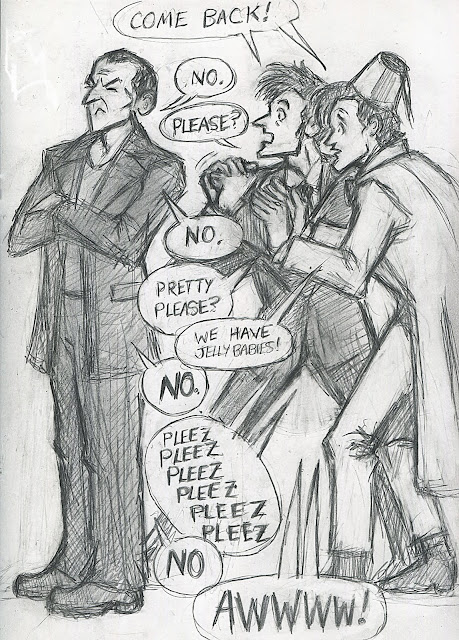 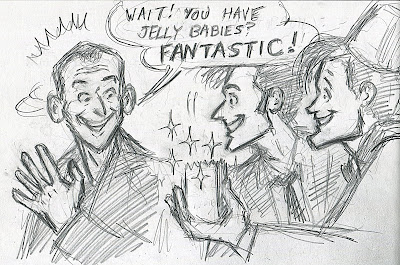 For an excellent look at the early days of Doctor Who, I give my highest recommendation that  you see An Adventure in Space and Time. Written by Mark Gatiss, it is a touching, loving look at the William Hartnell years.