Gouache. So, what is this stuff? It has a funny name, pronounced "gwash." Today I'll talk about how this very old medium became my Very Favorite Paint in The Whole World.﻿﻿

﻿
When I had become a little more comfortable with watercolors, some people I worked with  commissioned me to do an unusual group of pictures for them. These people happened to collect Pez dispensers. As proper Pez aficionados they traveled the country to Pez conventions to seek out all manner of Pez paraphernalia.

Who am I to judge, someone who, along with a gazillion books about the Pre-Raphaelites, also seemed to collect a vast amount of Godzilla toys?

My assignment (if I should accept it) was to paint several pictures of Pez dispensers that would be made into posters and postcards and sold as Pez Fan Art (yes, there is such a thing) at conventions.

Well, money is a great motivating factor for a would-be illustrator no matter how bizarre the subject matter, so the next thing I knew I was painting my first Pez dispenser in watercolor.

I like to paint and draw fantasy scenes above all else, and this is what my clients wanted: Pez dispensers in landscapes or with funky backgrounds. Okay. So far, so weird. After they saw and liked the first one I did, they gave me this one to paint: 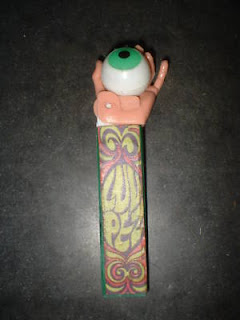 A Pez dispenser with a hand holding an eyeball, made sometime in the sixties. Apparently very sought after.

Yup, I was the woman for the job.

They wanted it to have a psychedelic background like in a Peter Max painting. Bright colors. And nope, watercolor would not do this weirdness justice.

When I started at Pratt, I had been given a list of art supplies I'd need for class. A lot of it I used and a lot I never used at all. This stuff fell into into the latter category.
Gouache. Sometimes known as bodycolor. Incorrectly called poster paint﻿. Still, I thought, it'll give me nice flat, opaque colors for a poster, right?

So I began the picture and this was the result: 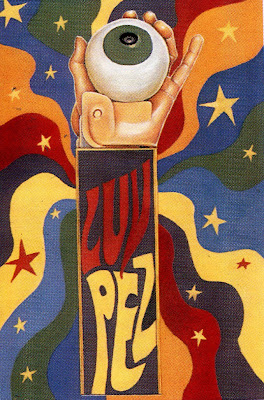 I know, not up there with Edward Burne-Jones' "Star of Bethlehem", but it was a start.

But I was astonished by this "new" paint I discovered.

2) It dries to a velvetty matte finish.

3) You can use it thick as oil or acrylic--or as transparently as watercolor.

4) It works and plays well with other media. I was to eventually use it with colored pencils, pastels, chalk, as well as regular watercolors. You can even make it "permanent" and waterproof  by adding a few drops of acrylic medium.


I tried it on the next couple Pez pictures, using it like I would my watercolors.﻿﻿﻿﻿﻿﻿﻿﻿﻿ 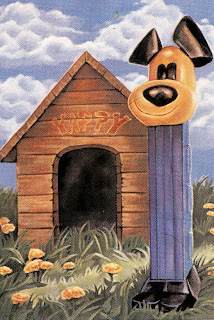 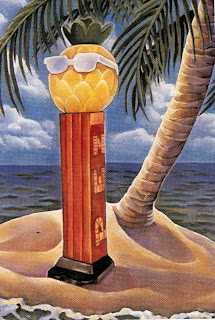 Don't laugh! This was serious artistic experimentation going on here.
Gouache has been around for a very long time. It was used as early as 14th Century Europe and takes its name from the Italian, "guazzo." Art historians prefer to call it bodycolor. What makes it thicker than watercolor is the addition of gum arabic and also chalk. (Hmm, I was
already mixing up blackboard chalk and watercolor, but that's another story...)
I started using gouache in my fantasy paintings, trying it on these two first:
And...
﻿
﻿

﻿﻿﻿﻿﻿﻿﻿﻿﻿
I soon realized that I loved using this stuff and it's odd when I hear people say it's hard to use. I don't find that's the case, because for me, it's a perfect fit. Best of all, I also don't feel like I'm wasting paint when I use it because when it dries on the palette, just add water and you've got wet paint again. You can't do that with oil or acrylic.

﻿﻿﻿
﻿﻿﻿ Anyway, this is how painting a psychedelic Pez dispenser actually helped me find my medium of choice.  Here's some more from 1997, the year I finally used That Stuff I Had From College (and so glad I still had it.) :
﻿﻿﻿﻿
﻿﻿