Yaira and the Dead City

Before I do a post on some  "fan art" paintings I've done, I thought I'd show you something a bit more recent. Infact, I finally finished it this week...

Yaira is a "runner" (aka, scavenger) for a small settlement outside the ruined walls of the Dead City.

She is an accomplished horsewoman and proficient with several weapons (preferrably anything pointy, but she can handle a lasso with a certain amount of flair...)

She gathers supplies, old medicine and the occasional forbidden book for her people, all the time trying to dodge the deadly guardian golems (called the Beserkers) left inside the city walls.  (She calls them 'Zerkers.)

For the cover painting of Yaira I first did a drawing in my sketchbook which I then photocopied at a larger size and transferred by lightbox to an 11"x 17" piece of vellum bristol paper (better surface for paints.) 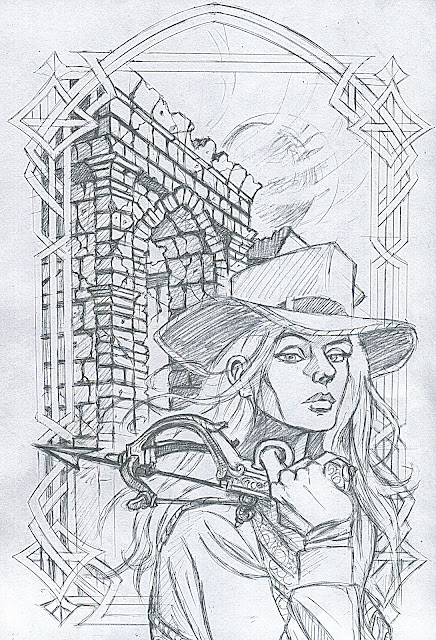 I should say that the border was done separately on a sheet of tracing paper and added afterwards to the sketch. (I only drew half of the entire border and flipped it over on the lightbox so the other side would match in reverse.) I wanted Yaira's border to be sharper in contrast to Swamp's more rounded one to sort of reflect the shape of her arrows.

When I was happy with the finished sketch transferred to bristol paper, I made photocopies again so I could refer back to them when I started painting. (I also loosely painted one of the photocopies to see which colors I wanted to use.) So with the painted photocopy and one of the original sketches taped nearby, I then started work on the actual painting. 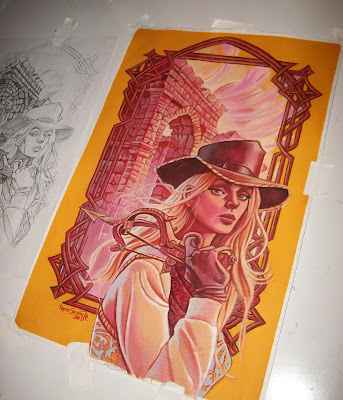 I wanted her painting to be in very warm colors (reds, golds and pinks) as opposed to Swamp's very weird, cold blues and greens.

The steps here to a finished illustration may seem like a lot, but this is how I seem to work best!